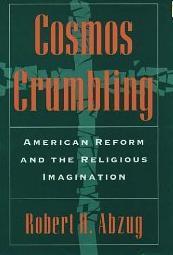 This review is from: Cosmos Crumbling: American Reform and the Religious Imagination (Paperback)

Robert Abzug's fresh approach to antebellum reform illuminates some of its underlying causes. Abzug explores the antebellum religious imagination, positing that the reformers set about "sacralizing the world"--radically joining Heaven and Earth. In antebellum America, the language of religion, politics and science all reinforced each other. Abzug argues that Lyman Beecher confronted the crisis in New England identity by transferring its spiritual identity as a spiritual Israel to all of America. This sense of mission then drove the evangelical program of reform. Likewise, William Lloyd Garrison re-imagined the basis of American society by advocating a radical egalitarianism--blacks were entitled to all rights of citizenship. Abzug argues that all reforms sprung from the wellspring of religious imagination. Reformers were rethinking church and society. Inspired by their visions, they set out to remake America. Abzug is convincing. My one main criticism is that Abzug did not set American reform in its larger context. Many American reformers were indebted to their European counterparts. What of the European religious imagination? How was it different from the American? Nonetheless, this shortcoming is small given Abzug's deep insight into American reform. I highly recommend this work to students of antebellum reform or American religion.